Historic Release of American Red Wolves to the Wild 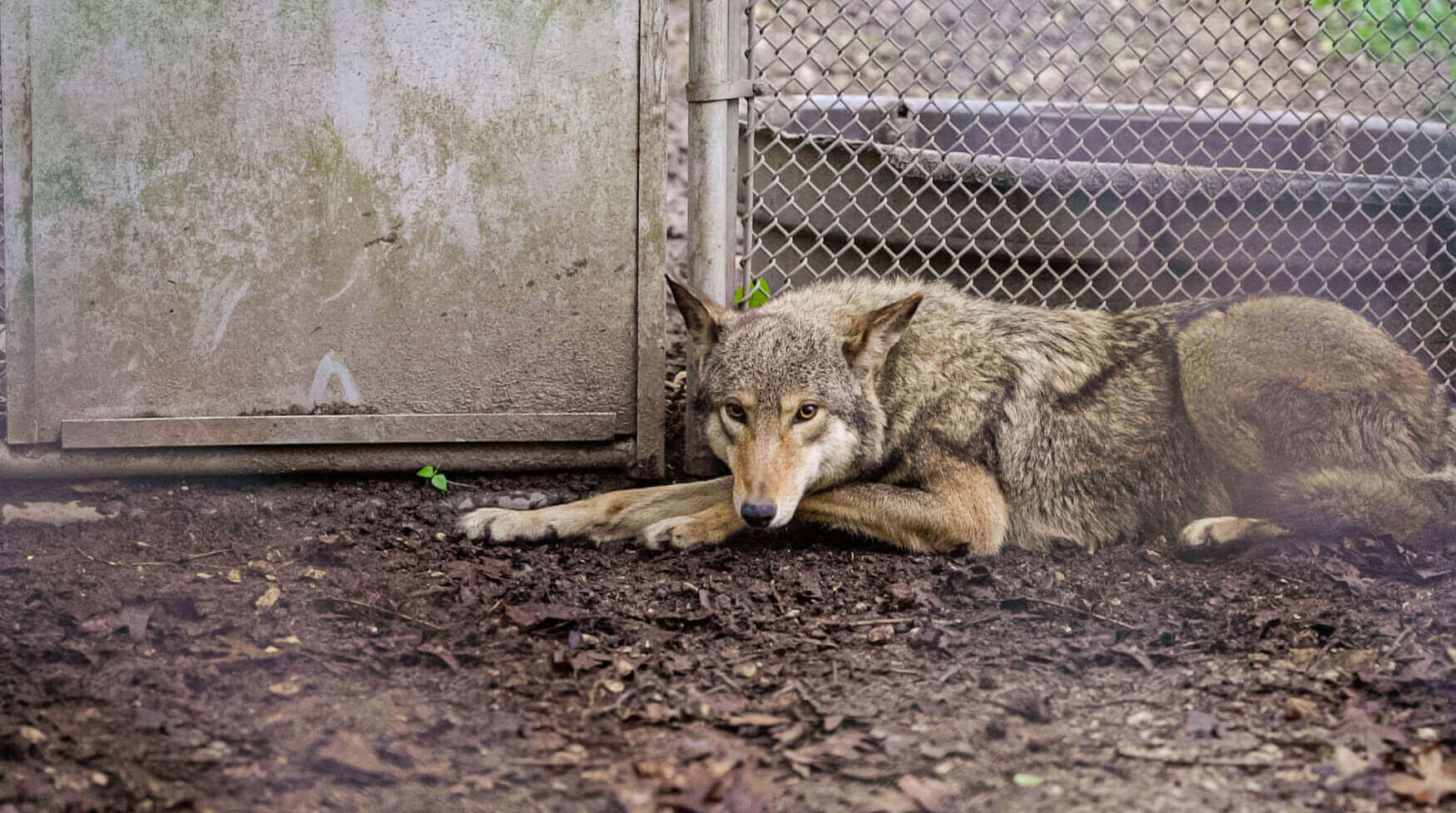 An American red wolf from the Endangered Wolf Center is one of four adults added to the wild population in North Carolina to help this critically endangered species recover.

On April 30 and May 1, 2021 four American red wolves from the Endangered Wolf Center, Wolf Conservation Center, and Wolf Haven International were released in a protected refuge of North Carolina. The goal? To assist in maintaining the only wild population of the most critically endangered wolf in the world.

This collaborative effort is the first time since 1998 that adult American red wolves were released into the wild from managed care facilities. 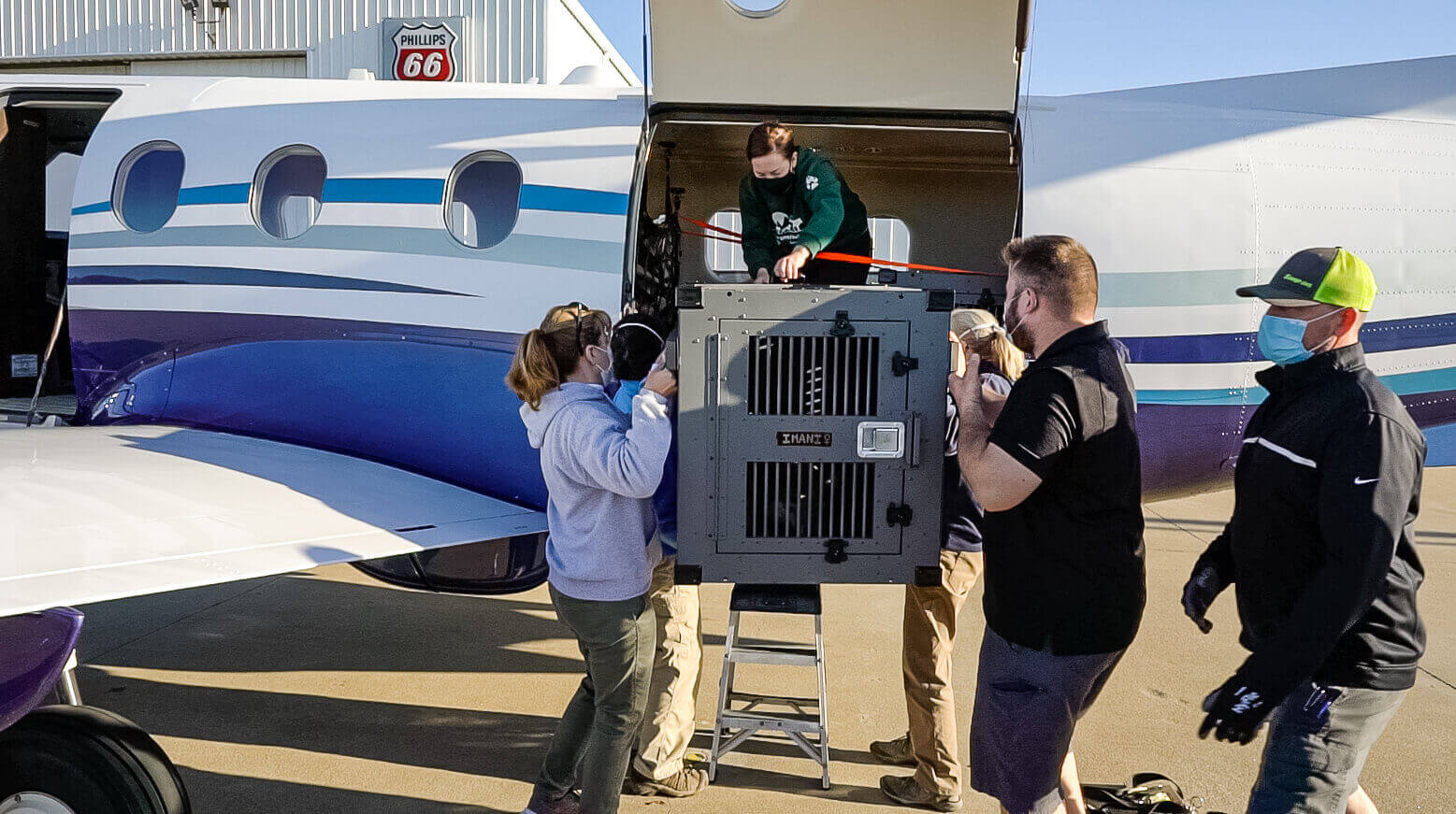 American red wolves board their flight to North Carolina.

Why Save the American Red Wolf?

“The American red wolf is a national treasure, and I am proud to be part of this committed team working to save the American red wolf from extinction,” said Chris Lasher, Animal Management Supervisor at the North Carolina Zoo, the AZA Red Wolf Species Survival Plan (SSP) Coordinator, and the AZA American Red Wolf Saving Animals from Extinction (SAFE) Program Chair.

As a keystone species, the release of red wolves is critically important. Keystone species help maintain ecological balance and the plants and animals within this ecosystem rely on the red wolf to maintain this balance. When red wolves remove sick or diseased animals, the spread of disease, including zoonotic pathogens, is reduced, creating a healthier environment for animals, plants, and humans.

“We are connected and dependent on healthy ecosystems,” said Virginia Busch, CEO of the Endangered Wolf Center. “Keystone species such as red wolves are a crucial piece of the puzzle to help restore balance to these damaged and fragmented wild places, which are all around us.” 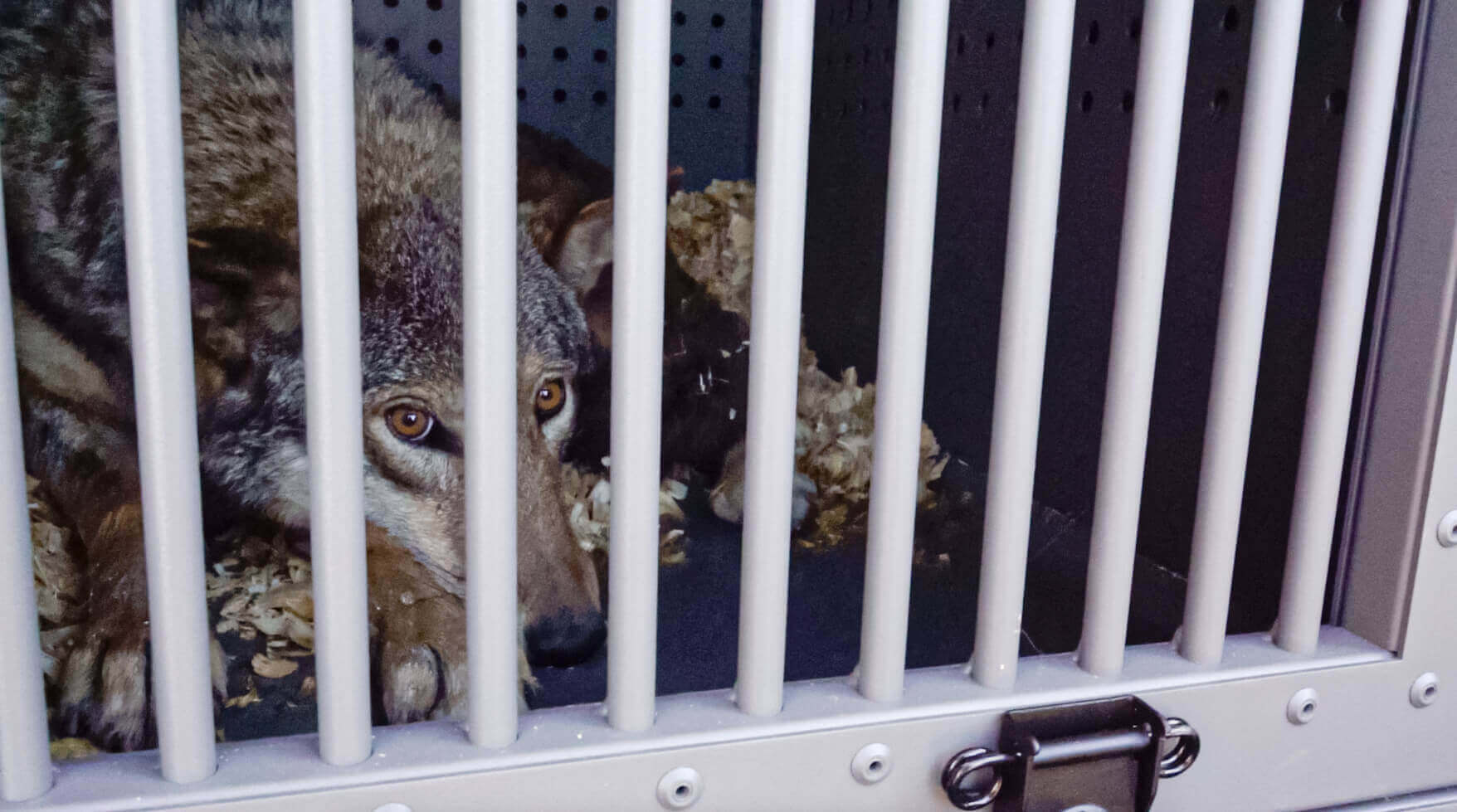 One of the most endangered wolves in the world, an adult American red wolf calmly travels to its new wild home in North Carolina.

Red Wolves Prepare for Takeoff, Thanks To…

Transportation for these red wolves was donated by Aero Charter, Lighthawk, and Pilots To The Rescue and at a significantly reduced rate by Alaska Airlines.

One of the flight crew joked that the wolves seemed calmer than many of their human passengers! 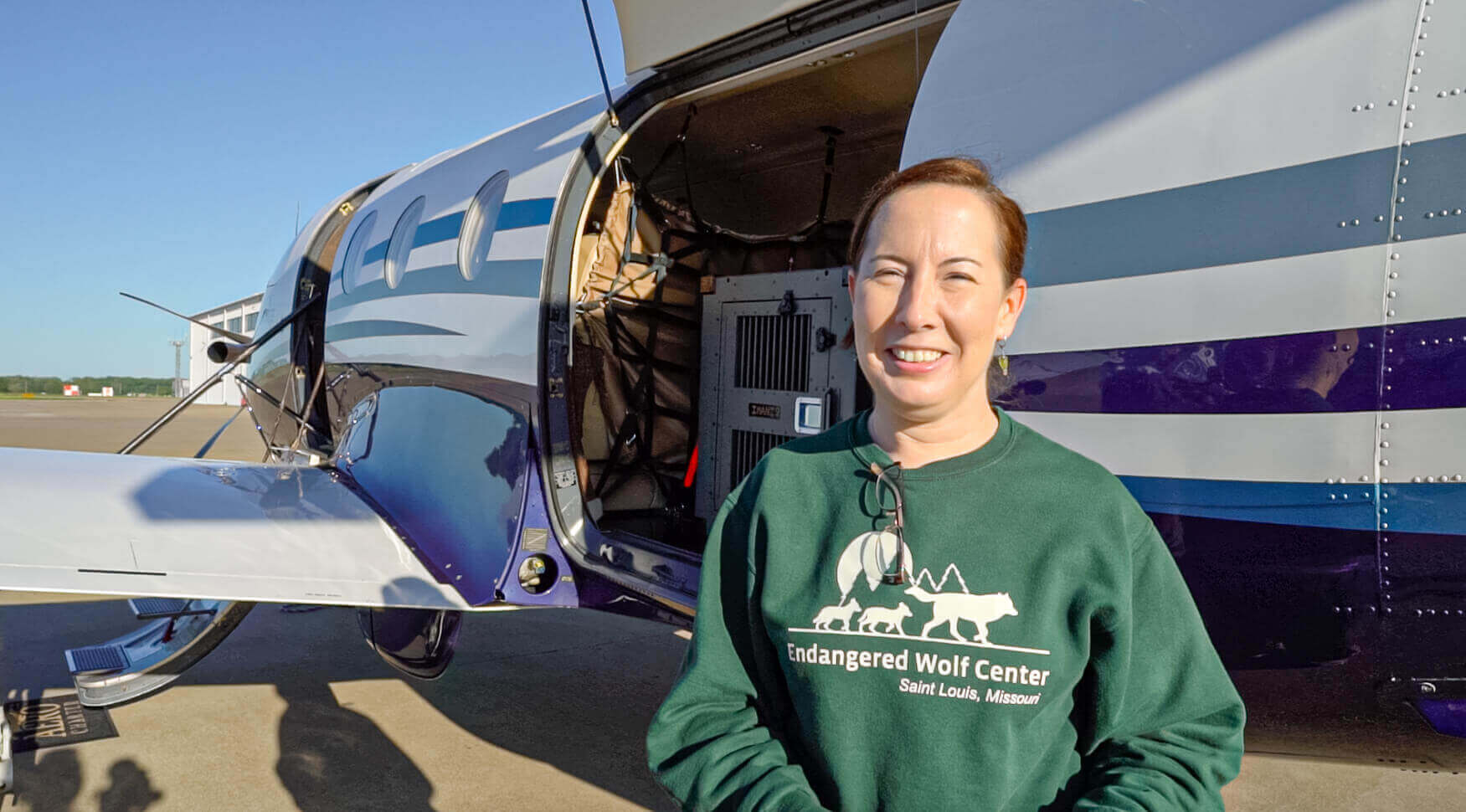 “This historic conservation effort was a great example of what can be accomplished when multiple entities such as the USFWS, conservation groups, nonprofits, and private companies all work together with the same principle goal to save an American species,” said Regina Mossotti, Director of Animal Care and Conservation at the Endangered Wolf Center and the AZA Red Wolf Species Survival Plan Vice Coordinator.

Wild About Red Wolves – Why Are Releases so Important?

Releasing animals is a conservation strategy that takes individual wolves bred and born in managed care and places them in their native range. Because the wild population of American red wolves is dangerously low, it is vital to place individuals of breeding age on the landscape to assist in the repopulation of the most endangered wolf species in the world. The zoological institutions and conservation centers that house these red wolves manage them in a way that allows them to retain natural instincts which will help them survive in the wild. For example, working to maintain a wolf’s natural instinct to stay away from humans, the SSP does not habituate wolves to humans, wolves are housed in groups and are fed native prey (such as deer) to teach them what to hunt, etc. 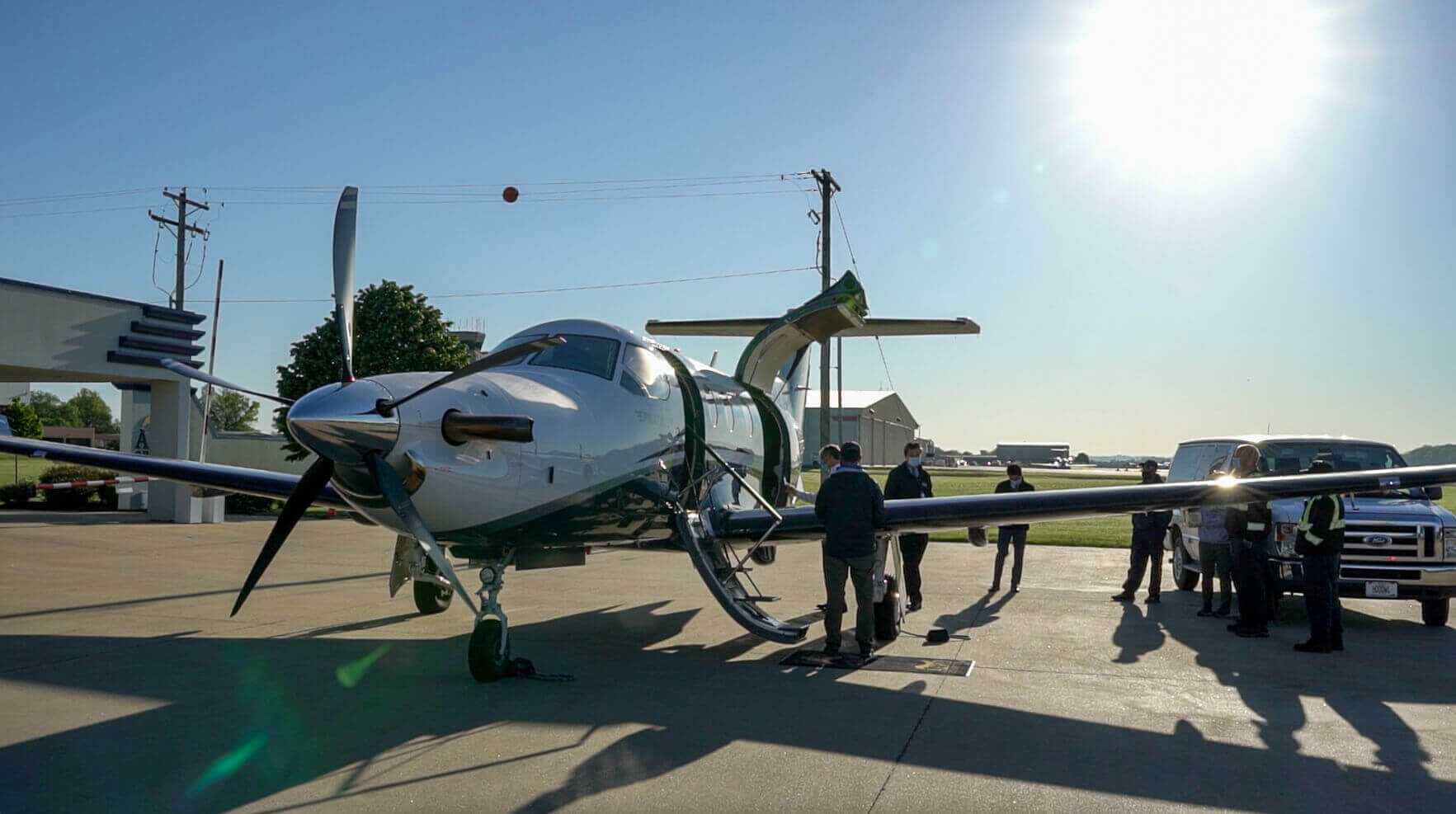 Aero Charter staff prepare the plane for takeoff for this donated flight to help save the most endangered wolf in the world.

The American red wolves were introduced to the landscape through a “soft release” process.  A habitat surrounded by temporary fencing was installed and animals were placed inside for a length of time providing them an acclimation period to their new environment and time to bond with their mates. When the time is right, the fencing will be opened, allowing the red wolves to confidently enter their new home.

The First Recovery Effort of Its Kind

This American red wolf recovery effort is the first of its kind. The U.S. Fish and Wildlife Service (USFWS), working with their partners, released the first red wolves into the wild in 1987. The program was successful for several decades and the wild population grew to an estimated 150 individuals. Unfortunately, over the past 14 years, the already critically endangered wild population plummeted to fewer than 20 American red wolves in the wild. Before these wolves were released there were 10 known collared red wolves and an estimated 17-20 total red wolves in North Carolina. 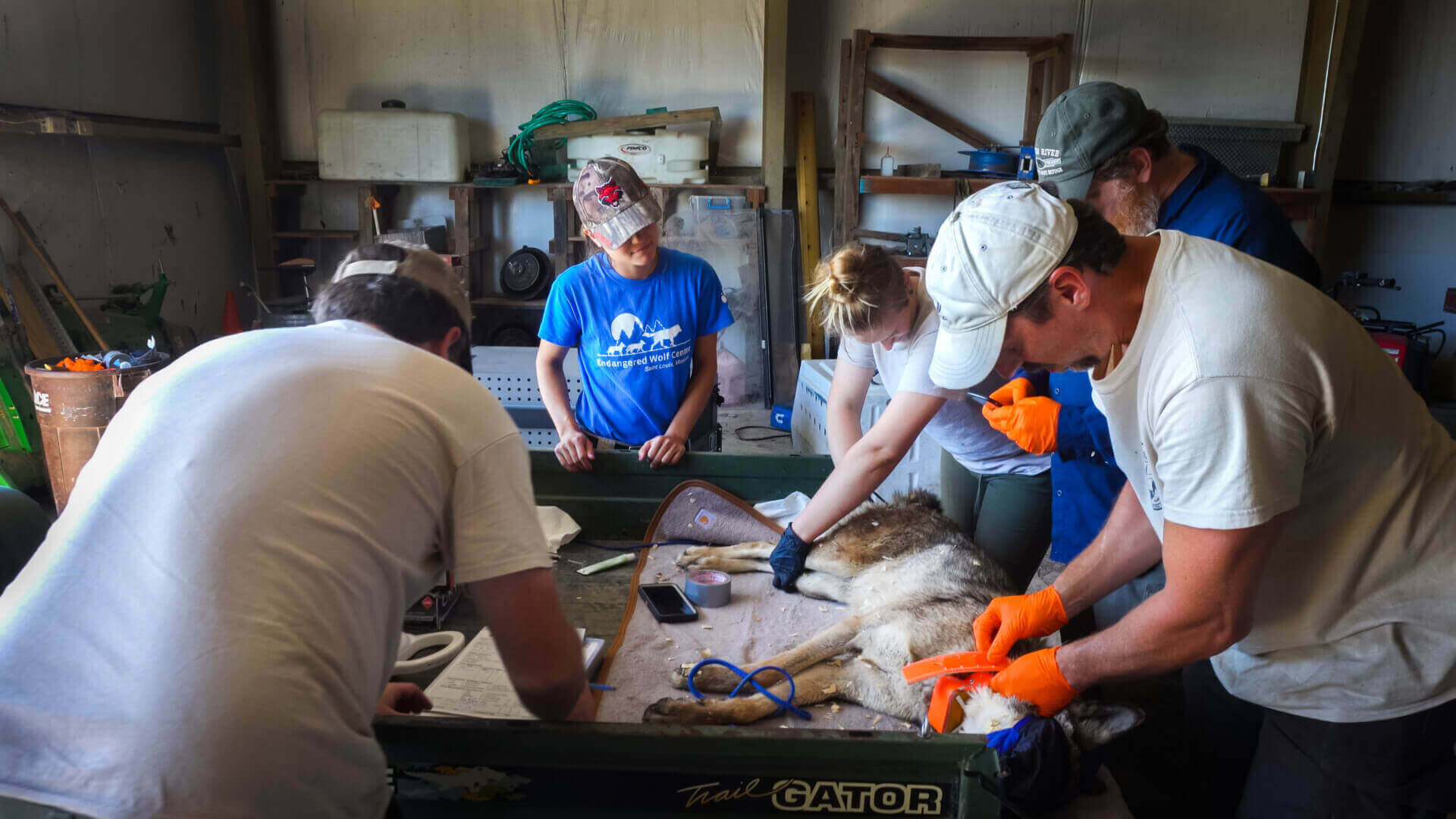 USFWS and Endangered Wolf Center Staff work together to collar an American red wolf before releasing it into its native range in North Carolina.

American red wolves are solely native to the United States. Historically, they roamed the Southeastern United States, from Pennsylvania to Missouri, to Texas, to Florida. Due to overhunting and habitat loss, the population declined dramatically. In 1973, the red wolf was officially listed as an endangered species under the Endangered Species Act. In the 1960s and ’70s, the U.S. Fish and Wildlife Service worked to capture the few remaining wild wolves to bring them into zoological institutions to launch a breeding program in hopes to recover this species. They accomplished this goal, but by capturing the few remaining wild red wolves, the American red wolf was functionally extinct in the wild. The breeding program in managed care was very successful and led to the first releases in 1987 in North Carolina which is currently the only location in the United States inhabited by wild American red wolves.

How You Can Help

You can get involved to help save the American red wolf. A great way to start is by learning about them, sharing what you know, and supporting organizations that are working to save this species. You can symbolically adopt our pack of American red wolves to support their conservation both at our facility and in the wild.

← Previous: Benefit Endangered Wolves While You Shop Next: EWC Fosters 11 Mexican Wolf Pups to the Wild →