The Endangered Wolf Center, United States Fish and Wildlife Service and the Interagency Field Team—which is made up of biologists from the US Fish and Wildlife Service, Arizona Game and Fish Department, USDA Forest Service, USDA Wildlife Services, and the White Mountain Apache Tribe—collaborate to fly four 10-day-old pups born at the Center from St. Louis to their new families in the wilds of New Mexico and Arizona in the first ever double foster.

The Endangered Wolf Center flew four critically endangered Mexican wolf pups to Arizona to be cross-fostered by two different wild packs (one in Arizona and one in New Mexico) on Wednesday, April 18, 2018. This historic collaborative effort between the Endangered Wolf Center staff, the Fish and Wildlife Services and its partners represents the first time four pups born in captivity have been “adopted out” to two different packs in two different states at the exact same time.

“Saving species requires creativity and breakthroughs in conservation techniques,” said Regina Mossotti, Director of Animal Care and Conservation at the EWC, “and this double foster was a great example of the Fish and Wildlife Service, the EWC and the states working together to seize a unique opportunity to help Mexican wolves.” 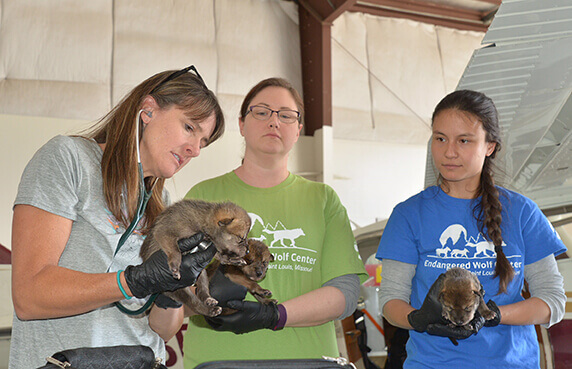 Cross-fostering is a technique where wolf puppies from one litter are placed with another litter in hopes that the wolf mother will adopt the additions as her own. Placing pups from captivity into a wild litter not only helps increase the population size in the wild but also helps increase genetic diversity. It is also a wonderful way to have wild parents (with an established territory and experience) raise and teach the pups how to survive.

Fostering is a relatively new technique for the Mexican Wolf Recovery Program. With fewer than 150 individuals left in the wild—mostly found in Arizona and New Mexico—these four pups born at the EWC on April 9, 2018 (male pups “Benny” and “Grenville” and female pups “Spirit” and “Belinda”) represent vital new genetics needed for a critically endangered population. 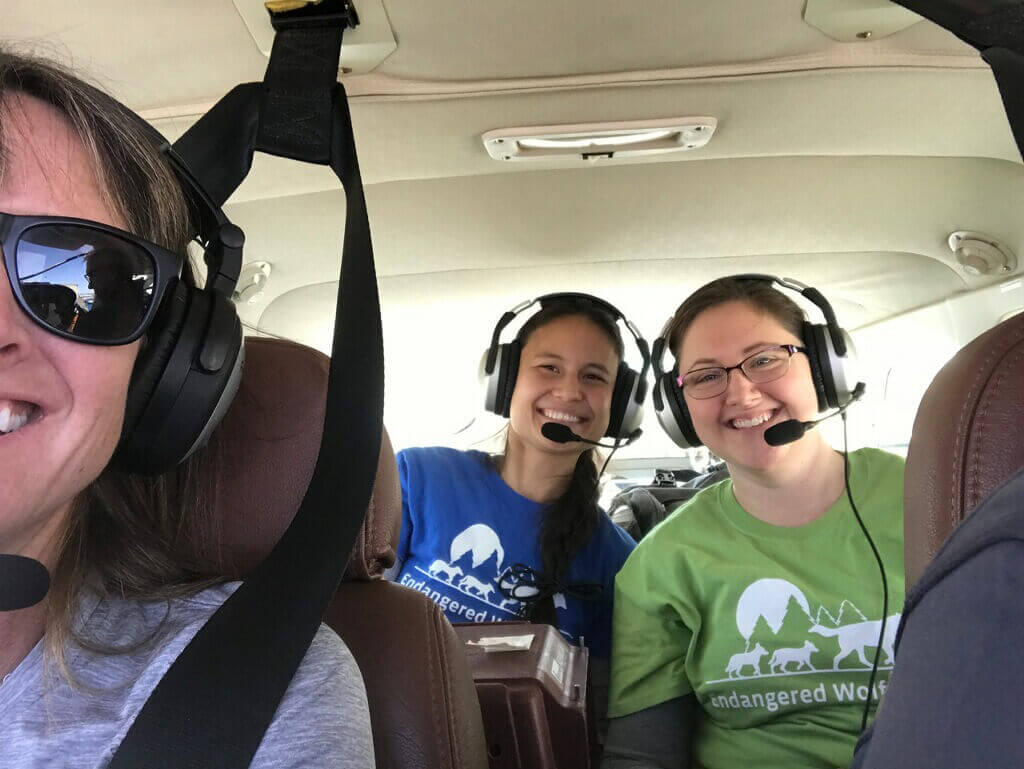 Extreme terrain and logistics make fostering challenging, and the timing has to be just right. Wild and captive litters have to be born within a few days of one another, and the transfer from captivity to the wild has to occur before the pups are fourteen days old. “Everything has to line up…the stars, the sun, the moon, and the planets all have to align to make a foster happen,” said Mossotti. “The timing of the birth of wild pups has to be within a few days of our pups…to say nothing of the logistics. There are weather considerations, flights and travel, personnel, locating wild dens, securing funding—all pieces of the puzzle have to come together very quickly to get this done.”

All four pups before release during vet check in the recovery area.

This operation almost stopped in its tracks, due to high winds and a wildfire in Arizona. Overcoming the logistics and managing the shifting and potentially dangerous conditions on the ground make the success of the Endangered Wolf Center, the USFWS, and Arizona Game and Fish’s efforts all the more remarkable.

The four pups flew to Arizona, accompanied by Sarah Holaday, EWC Animal Care Staff and Kim Rutledge, Executive Director of the Wildlife Rescue Center. “Our staff members are experts, and they did an incredible job making sure that these precious pups stayed safe, warm and well-cared for on their journey to the wild,” said Virginia Busch, Executive Director of the Endangered Wolf Center. “The Endangered Wolf Center is proud of our efforts to collaborate to grow the conservation success for the endangered species the EWC is working to save.” 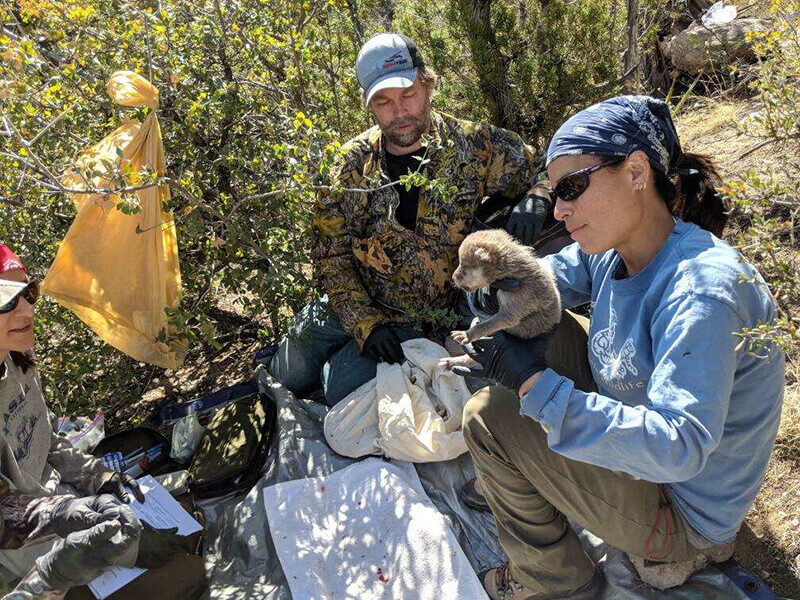 This year, several wild packs denned at the exact same time as the pack at the Endangered Wolf Center. Sibi (mother) and Lazarus (father) at the EWC had a litter of seven healthy pups. Having this large litter offered the opportunity to take four pups and place them into two different packs litters. “It is rare to have litters match up, but to have several at once was very exciting!” said Mossotti.

“The Endangered Wolf Center has been working for almost 50 years to help make breakthroughs in conservation for endangered canids. And efforts like this double foster are examples of how conservation for the Mexican wolf is moving in a positive direction!” said Busch.

Celebrate with us by making a donation to continue our wild efforts.