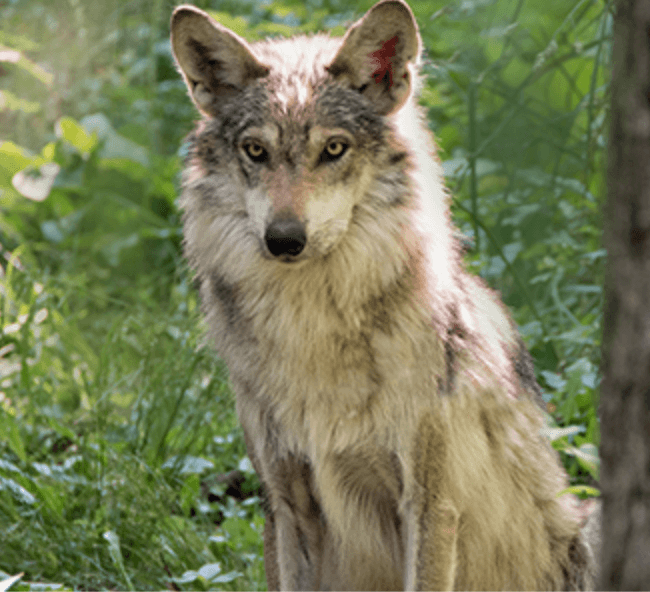 I am…the resident goofball – even as a dad. While I’m as attentive and loving to my pups as they come, we share a favorite word. Play.

Mack and his brother, Amigo, were born on May 8, 2013 at the Wolf Conservation Center in Salem, New York. As the only surviving litter of their parents, instantly the two pups became extremely genetically valuable to the Mexican wolf recovery.

The Species Survival Plan (SSP) made the decision to have the pups hand-raised and fostered by a pair of adult wolves. The SSP is an effort by the Association of Zoos and Aquariums to help ensure the survival of threatened or endangered species through well-managed breeding programs in select zoos or centers like ours.

Translation? These two young bachelors were about to enter the dating pool.

Mack and Amigo arrived in our care in October of 2014. Right away, their personalities stood apart. Mack was the outgoing comic. His playful, curious personality and high energy was quite the contrast to the shy, more reserved Amigo.

While Amigo soon found a promising match in Rogue, Mack’s young, rambunctious energy was proving a bit much for some potential mates. That was, until a wolf from Mexico named Vera arrived at the Endangered Wolf Center.

Vera’s father already had a special place in our hearts. His name was Perkins, named after our Center’s founders, Marlin and Carol Perkins. Vera has a very calm personality, and knows just how to let Mack know if he’s being too rowdy. The two have a close bond, and we often see them sharing food or just being close to one another.

In May of 2016, Vera gave birth to their first litter, with four healthy puppies. Shortly after the pups were born, a very rare opportunity arose to cross-foster two of their pups in the wild. Cross-fostering means, when the birth of pups in the wild and pups in captivity occurs and nearly the same time, there’s a very short window of opportunity to place pups with a wild foster mom.

Many people are surprised to learn that female wolves will foster pups who aren’t their own. But the more you know about wolves, the less surprising this nurturing, family-oriented behavior becomes. Having a wild mom foster captive-born pups is a way of increasing the genetic pool in the wild, but also gives captive born pups a way better chance at learning to be wild from the pros – their new foster parents.

Linda and Valeria, two of Mack and Vera’s first female pups, were chosen to join the wild pack, and in doing so made history as only the third such introduction of its kind.

Your adoption of Mack will help him and his pack continue to make history as we work to rewrite the future of these endangered wolves, a keystone species who entire ecosystems depend on in order to survive and thrive.