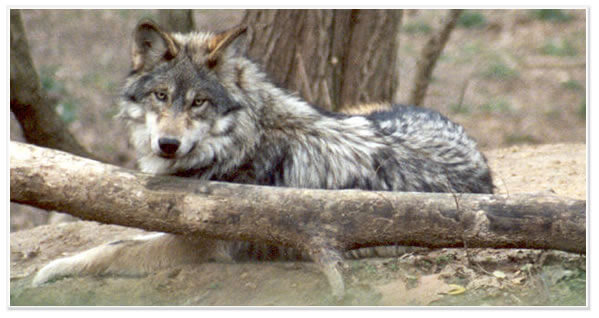 A tribute to Anna,
the Matriarch of Mexican gray wolves

Every once in a while, someone truly extraordinary comes into our lives. Leaders and teachers who inspire us, and help shape our lives in ways that stay with us long after they’re gone. Recently, our pack lost just such a leader – our bold, beautiful, beloved Anna.

Anna was the only surviving pup of the pairing of two legendary wolves. Santa Ana, her father, was one of the last pure Mexican wolves from the Ghost Ranch lineage. He was recovered after the species was declared extinct in the wild in 1980, making him the most genetically important animal of his species at the time. While Anna certainly favored her magnificent father in her looks, she no doubt inherited as much of her alpha instincts and leadership skills from her also legendary mother, Tanamara, of the McBride lineage.

Anna was born on Earth Day, April 22, 2001. Despite her efforts as a new mother, Tanamara lost two of three pups from this litter – the last sired by 13-year-old Santa Anna, who passed away later that year. Wisely, the decision was made to hand-rear the third pup, Anna, knowing how important she was to the recovery of the species. Little did anyone know just how important she would be.

Because she had been hand-reared, Anna was not releasable in the wild. Still, her role in the wild is unmatched. She gave birth to 41 pups in four separate litters of record-breaking numbers. Several of her offspring now live in the wild. Others remain in our care at the Center as part of our Saving a Species breeding program.

Sadly, Anna passed away one day before her 14th birthday. As we said our goodbyes, we left her with a promise – that her legacy will not end.

Help us pen this next chapter in endangered wolf recovery. Share Anna’s story, invite friends to follow our page or become members, consider adopting Anna in your name or on behalf of a strong woman or matriarch in your life, or by making your own promise to be an advocate for wolves and wild places whose ecosystems depend on them.

Goodbye, dear Anna. Thank you for the inspiration, legacy and family you left behind. You will be desperately missed, but you have our promise – your story will continue…