Wolf Pups Fostered to the Wild Despite Pandemic

Endangered Wolf Pups Fostered to the Wild Despite Pandemic

COVID-19 has brought on unique challenges in all corners of the earth.

While news of the pandemic crisis dominated the headlines, the Endangered Wolf Center worked to ensure conservation was not paused. This pandemic has driven home the fact that our environment, when out of balance, can lead to negative ramifications for wildlife and for humans.

The Mexican wolf plays a crucial role in the balance of their ecosystems.

The Endangered Wolf Center focuses on returning keystone species, such as the critically endangered Mexican wolf, to their native habitat. Wolves and other large carnivores were eradicated from the landscape in the late 1800s and early 1900s before humans realized the vital role they play in keeping the ecosystem balanced and healthy.

“Understanding how human health is linked to our ecosystem’s health shines a light on the importance of these foster efforts,” said Virginia Busch, CEO of the Endangered Wolf Center. “Now more than ever we need to prioritize restoring damaged ecosystems, saving endangered species and protecting our remaining wildlife and wildlands.”

Mexican wolves are a critically endangered wolf native to the Southwestern United States. Once numbering in the hundreds of thousands, extermination programs and habitat loss have led to a dramatic decline. Today there are less than 200 left in the wild, and they are mostly found in Arizona and New Mexico.

Mexican wolf pups are given veterinary exams prior to their journey to the wild.

Since the first successful captive-to-wild foster in 2016, we have employed a ground-breaking, innovative conservation technique to grow the fragile population of the Mexican wolf, fostering Mexican wolf pups from human care into wild Mexican wolf dens in Arizona and New Mexico. While still in the beginning stages of this effort, every year we are looking into ways to improve and develop this new technique so it is as successful as possible.

Despite the added challenges of continuing critical conservation efforts during a global pandemic, the Endangered Wolf Center flew nine critically endangered Mexican wolf pups to Arizona to be fostered by three separate wild packs in New Mexico and Arizona this spring.

It has been a record-breaking foster season; 20 total pups have been placed in the wild this spring from five different zoos and conservation facilities, a 67% increase over the previous highest record which saw 12 pups fostered to the wild in 2019.

Outside of Aero Charter’s plane, Regina Mossotti (back right) and Rachel Broom (back left) handing pups to veterinarians, Dr. Ole (l) and Dr. Allen (r) with the AZ Game and Fish Department.

“This effort took major collaborations between our EWC staff, individual donors, and government agencies. The power of collaboration – when all of these entities successfully work together – is essential to save species like the Mexican wolf,” said Rachel Broom, Director of Development, who traveled along with the pups to their new homes.

Normally pups are transported on commercial flights, however, for the safety and health of the staff, that was not a possibility this year due to Covid-19 risks. Fosters would not have happened this year without the generous donation of flights on private planes provided by LightHawk and pilot Michael Schroeder, Luxco, Aero Charter and Ray Van de Riet. 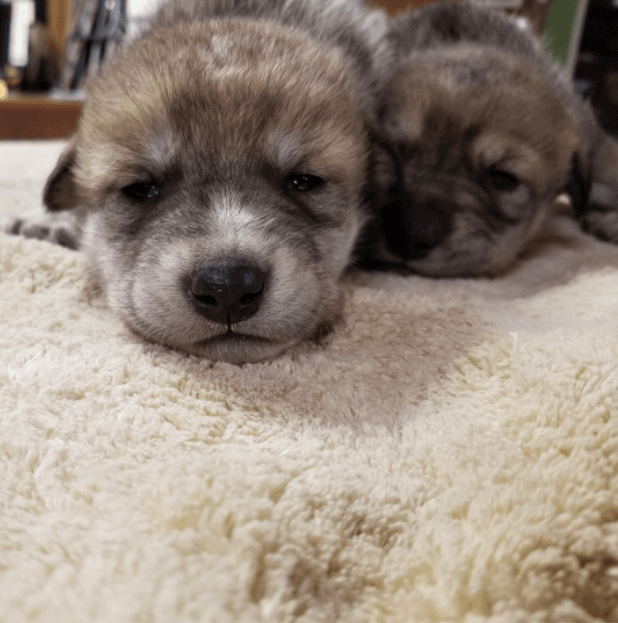 Wake me up when I get to be WILD!

The nine pups born at the EWC in April (male pups “Jose”, “Bandelier” and “Rusty” and female pups “Regina”, “Nora”, “Sidonia”, “JeanTabaka”, “Kachina” and “Grace”) were placed into the Elkhorn, San Mateo and Dark Canyon Packs.

“The Mexican wolf is one of the most critically endangered mammals in the world, and pushing fosters forward is vital to saving this amazing wolf,” said Regina Mossotti, Director of Animal Care and Conservation at the Endangered Wolf Center. “As always, this foster was a great example of the Fish and Wildlife Service, the Species Survival Plan (SSP), and the states working together to seize a unique opportunity to help Mexican wolves.”

How & Why Fostering Wolves Works

Fostering is a conservation strategy that takes wolf pups born in one litter and places them with another litter in the wild with the hope that the wolf mother will adopt the new additions as her own. With fewer than 200 Mexican wolves left in the wild, these nine pups born at the Endangered Wolf Center represent vital new genetics needed for a critically endangered population.

“When you are talking about a tiny endangered population, genetics play an important role in whether that population survives. Good genetic diversity allows the population to be healthier, and to hopefully grow and thrive,” said Mossotti. The foster technique also provides a unique opportunity for wild parents (with wild experience and an established territory) to raise and teach the pups how to survive.

Fostering works because wolf mothers have extremely strong maternal instincts to care for their pups.

Wolf mothers clean, nurse, and protect their young babies and that bond is forged in the first few weeks of the pups’ lives. In addition, we help secure the mother’s bond with the new pups by taking care to help the pups born at the Endangered Wolf Center “blend” in with their new wild brothers and sisters. We make sure not to get our scent on them when we perform their health exam, feed them, and during transportation.

When the pups get to their new wild home, the field team takes dirt from the wild den and rubs it on the foreign pups. They also have the wild and captive-born pups urinate and defecate on each other to cover any unfamiliar smells and ensure that all the pups smell much like each other as possible. Because of the strong bond and nurturing nature of the wolf mothers, when she gets back to the den after the new pups have been added, she accepts them as her own.

Extreme mountainous terrain and other logistics make fostering a challenge, and the timing has to be just right. Wild and captive litters have to be born within a few days of one another, and the transfer from managed care to the wild has to occur before the pups are fourteen days old.

“Wolves give birth any time between the beginning of April to mid-May, but timing of the birth of wild pups has to be within just a few days of our pups…to say nothing of the logistics,” said Mossotti. “There are weather considerations, flights and travel, personnel, locating wild dens, securing funding—all pieces of the puzzle have to come together very quickly to get this accomplished.”

This year’s operation almost did not occur due to the coronavirus pandemic, but the team came together quickly to develop a protocol to keep the humans and the animals protected during the conservation efforts.

LightHawk pilot Mike Schroeder loading precious cargo (Nora, JeanTabaka, and Grace) into his plane. Mike woke up at 3 am to ensure the pups arrived at their destination early and minimizing their time away from a mother.

“Being wild is hard, and the successful recovery of an endangered species is a constant challenge,” said Busch. Efforts such as this foster are examples of how conservation for the Mexican wolf is moving in a positive direction – and the Endangered Wolf Center is proud to play a role in it.”

Thanks to the many individuals and organizations making this possible, twenty more Mexican wolves will grow up wild in 2020. This incredible story shows that when a determined group of people works together, they can make great things happen.

We would like to thank our many collaborating partners:

Thank you to our Wildlife Release Heroes:
Expeditions were funded by individuals sponsoring each puppy.

To learn more, attend our upcoming Webinar: A Pup’s Journey to the Wild

Join wildlife biologist and Director of Animal Care and Conservation Regina Mossotti on a wild conservation journey as she shares her first-hand experience of cross-fostering endangered wolf pups into the wild.

Being held on May 28 at 5:30 PM CT – these limited tickets are $15 and all funds will help us continue this important conservation work.