We’d like to thank the many thousands of visitors who helped make Wolf Fest 2016 the huge success it was. (Wolf Fest 2017 will be Saturday, Oct. 21.)

And we especially want to thank the many sponsors who made our open house event on Oct. 8 possible:

The Kids’ Area featured a climbing wall and bounce house.

Wolf Fest is one of just a handful of days (Holiday Boutique on Dec. 3 and Messy Play Days are the others) when visitors cans tour the animal enclosures without making reservations in advance.

Multiple booths and exhibitions fit in with Wolf Fest’s theme of wildlife/conservation/outdoors. Among the exhibits:

Two photogenic mascots were on hand: the African painted dog and Lobo the Mexican wolf.

The kids’ area featured games and crafts, and a bounce house and rock-climbing wall.

The Endangered Wolf Center is a 501c(3) non-profit and receives no funding from the state or federal governments.  Wolf Fest is one of our biggest fundraisers of the year and we greatly appreciate your participation. 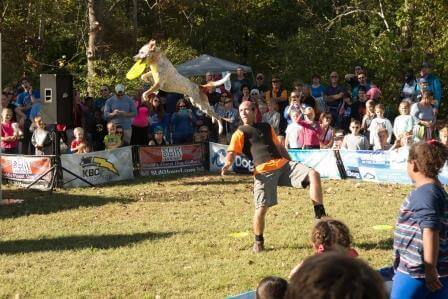 Jonathan Offi and his ‘Canines in the Clouds’ did three shows.

Gumbo the American alligator was part of the Conservation Ambassadors program.

← Previous: We must remain on the side of zoos Next: Antire Road resurfacing finishes early →