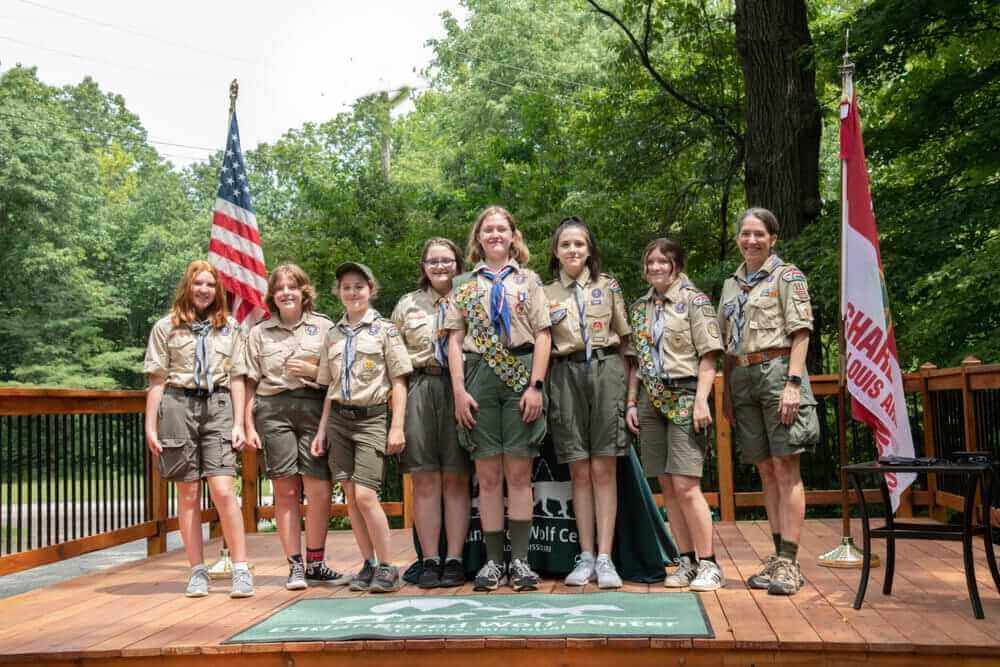 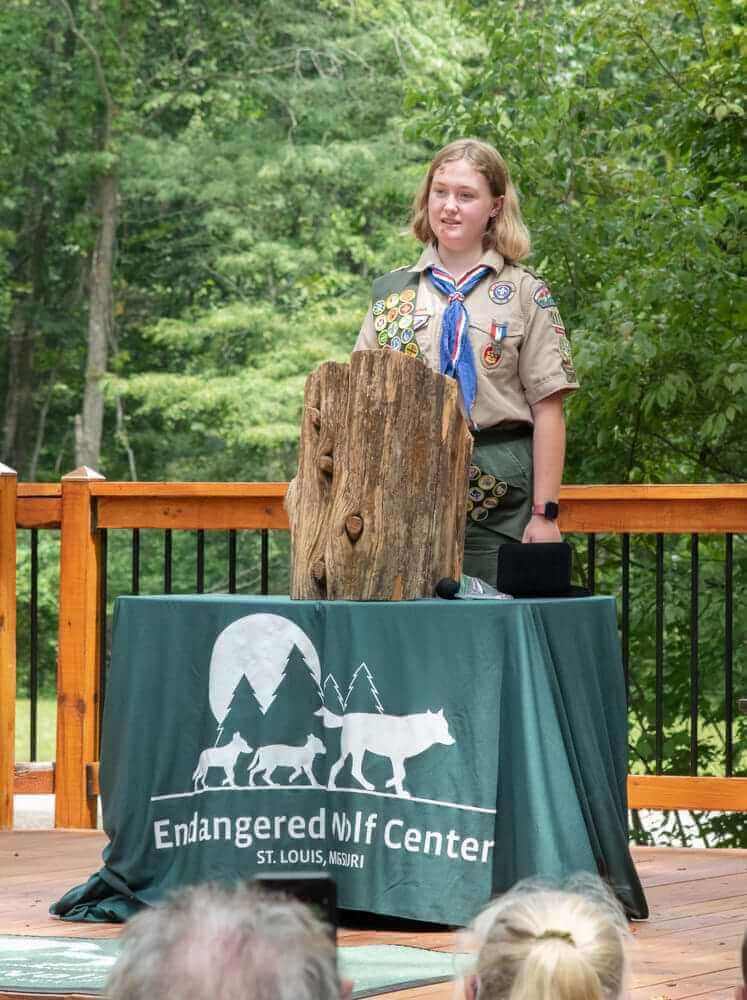 Shannon Renkey is one of five scouts that founded the first female Scouts BSA Troop in the greater St. Louis Area Council Boone Trails District.  Shannon was the first female in the Greater St. Louis Area Council-Boone Trails district to appear before the Eagle Project Proposal Board and the first to have it approved. The scope of the stage project was formidable for a scout and Shannon accepted that challenge.   “I told her it would take at least $3,000,” said Greg Renkey, Shannon’s father and scout mentor. “The pandemic would make it difficult to raise that much money and she might not make that inaugural Eagle Scout class. I laid out the option to pick a smaller project to ensure she completed it by February. Shannon declined that suggestion.”      To be in the inaugural class of female Eagle Scouts, she would need to have the project completed and reviewed by the Eagle Board by February 8, 2021. “Shannon specifically chose to do more for the EWC than to receive a personal ‘first’ award,” Greg said. 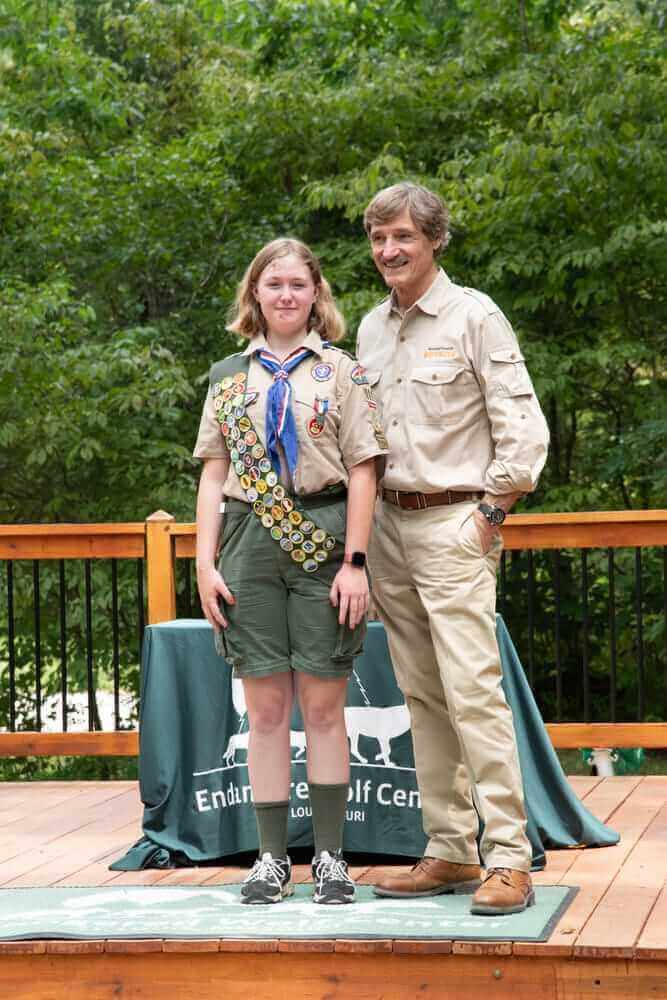 Special thanks to Mutual of Omaha’s Wild Kingdom for providing a matching gift for this project.

Shannon and her volunteers completed the on-site installation on March 14, 2021. She received the project acceptance signature from the Endangered Wolf Center and appeared before her Eagle Board on April 26, 2021, becoming the third member of female Scouts BSA Troop 911, and the third girl in the entire Boone Trails District to receive her Eagle Scout award. She is currently the youngest girl Eagle Scout in Boone Trails District.  The stage has a stunning railing, stairs perfect for group photos, and a beautiful stain on the wood. It is located near our campfire area and was recently opened to the public. We are grateful for her efforts and dedication to our mission. 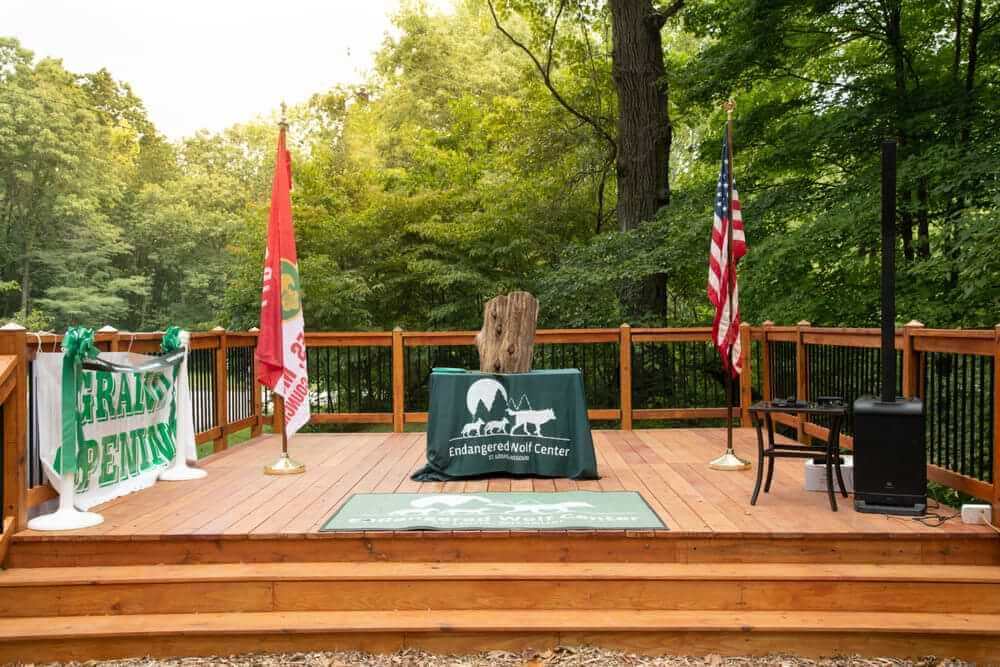 “I first visited the Endangered Wolf Center in December of 2019. My mom won a Tour and Enrichment package during a silent auction. It was so fun to tour the EWC and get to see so many wolves up close. After the tour, our group made wreaths that we threw into the painted dog enclosure. It was fun to be able to interact with the painted dogs and to watch them play with the wreaths. I wanted to be able to help these amazing animals by raising awareness for the EWC.” – Shannon Renkey. 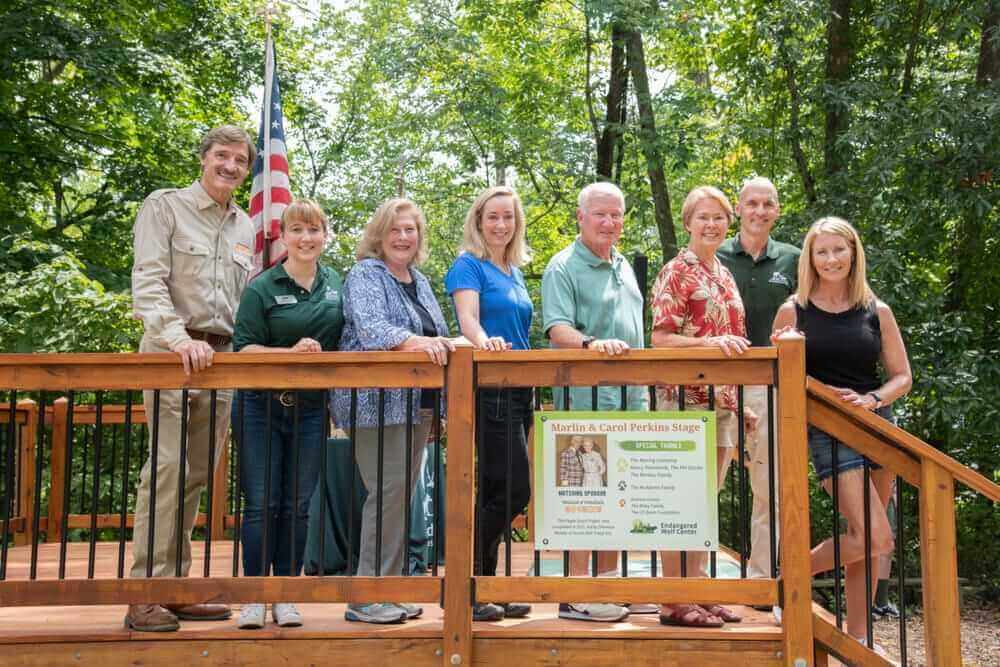 Peter Gros joins EWC staff and the Perkins family to celebrate the Grand Opening of the Marlin & Carol Perkins Stage.

She dedicated this stage to EWC founders, Marlin and Carol Perkins, in honor of our 50th anniversary. Marlin was the TV host of Mutual of Omaha’s Wild Kingdom, so it is particularly special that they generously matched Shannon’s fundraising efforts to help make this project possible. 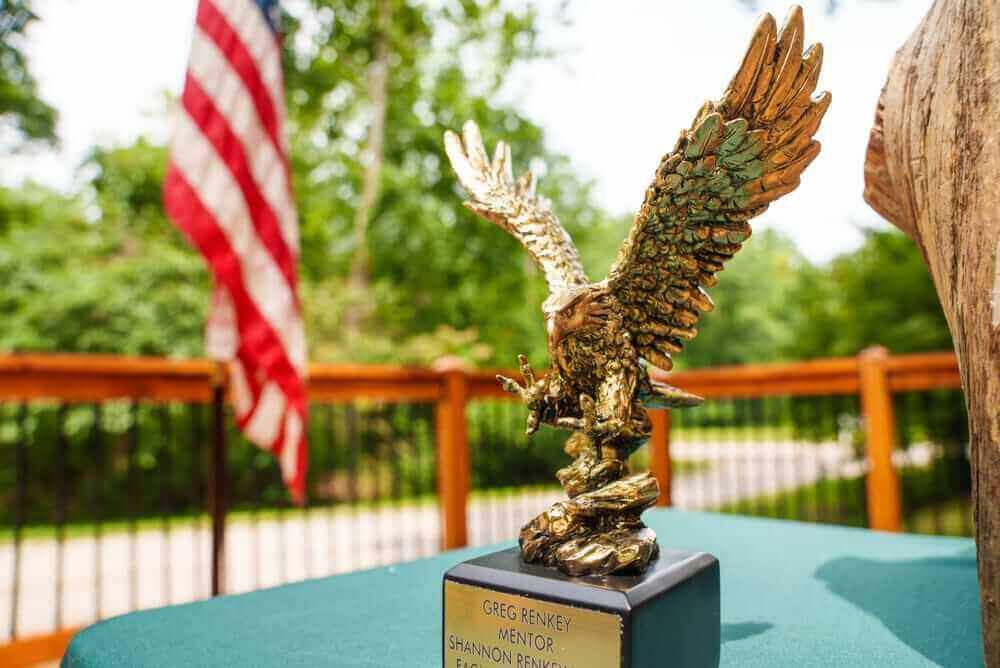 “We love working with youth leaders in our community – like Shannon – to promote awareness and action to help conservation efforts. We’re excited to use the stage for animal ambassador meet and greets, summer camps, presentations, concerts, and more!” – Executive Director, Mark Cross. Shannon, along with the entire EWC Staff, thanks all of the donors and volunteers that contributed to her project, especially Mutual of Omaha’s Wild Kingdom and the family of Marlin and Carol Perkins for their generous support. Shannon is honored to contribute her project to this valuable conservation history.
← Previous: Stephanie Arne Appointed Director of Education for the Endangered Wolf Center Next: Press Release: CEO Virginia Busch to Retire in December →