I am…a happy guy. A fan magnet. And a complete camera hound. Though I don’t have a hound bone in my body.

Sometimes it’s fun to look at our dogs and imagine that their distant ancestors were once at home in the wild. Yet evolution took thousands of years to go from species like the wolves of the wild west to the toy-chomping, Frisbee-catching, jogging companions and lap dogs (whether they’re aware of their size or not) who today share our homes and steal our hearts.

That’s why stories like Artie’s are so unfortunately predictable. If Artie looks more like a wild dog than a house pet, well, that’s because he’s not a dog at all – at least not in the traditional sense. He’s an Arctic Fox. A canid species at home in the areas you’d expect given his name – the frozen Arctic and alpine tundra of places like Siberia, Greenland, Alaska and Canada, trotting along the sea ice scavenging hunts from polar bears.

Like lots of wild animals sold by unscrupulous breeders as house pets – especially when they’re young – Artie is super cute. But unlike dogs, naïve buyers don’t realize that wild animals still have many of the traits that helped their ancestors survive in the wild – traits that all too rarely make them unsuited for domestic life.

When he arrived at a partner agency, Missouri’s Wildlife Rescue Center, it was obvious someone was giving up on him. He was injured, emaciated and had a fever from an infection.

As he began to recover, he faced an even bigger challenge. Because he wasn’t born to a wild pack, he didn’t have the skills to survive on his own in the wild. Release into the wild for this young fox would have been a death sentence. This is why stories like Artie’s can be such tragedies. Stuck in the middle with no domestic home and no possible home in the wild, the only option can be grim.

But fate was about to hand Artie a second chance: a home at the Endangered Wolf Center. Here, Artie is already using his magnetic charm to help share the message of his story, and is a wonderful ambassador to his spectacular species. He’s now part of a world-class education program that teaches respect for wildlife and the vital roles they play in the health of our ecosystems. 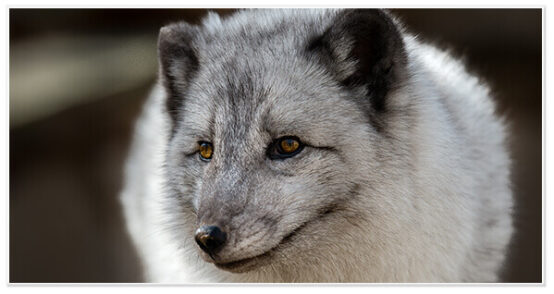